Christ Wesleyan Theatre Productions is excited to announce its spring 2016 performances of: 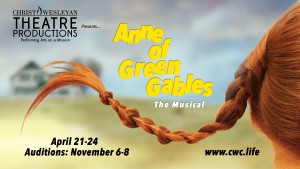 The classic tale of an orphan girl, Anne, who rises from destitution to happiness in the farm country entirely by virtue of her pluck and personality. Anne’s adventures at Green Gables, the farm owned by her new caretakers, are both comical and heartwarming. This show, based on the novel written by L.M. Montgomery with 50 million copies sold worldwide, is revered by audiences around the world. As always, Christ Wesleyan Theatre Productions brings to you a family-friendly show with a heart as big as its red-pig-tailed title character. It’s not afraid to wear that heart on its sleeve or tug shamelessly at your tear ducts as it heads toward the final curtain.

Please note: The following materials are not for distribution. All audition materials listed on this page are copyrighted and for audition use only.