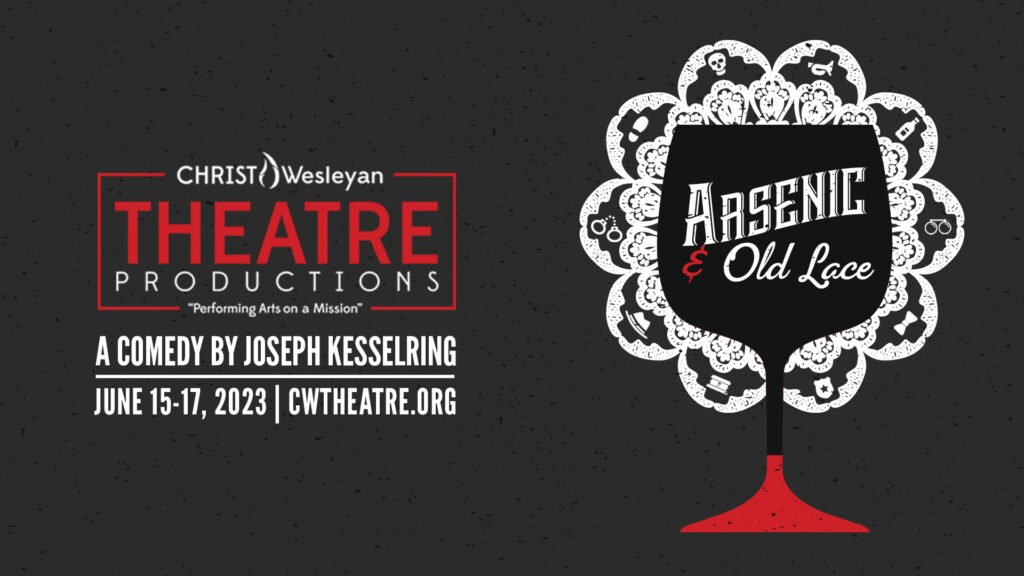 Drama critic Mortimer Brewster’s engagement announcement is upended when he discovers a corpse in his elderly aunts’ window seat. Mortimer rushes to tell Aunt Abby and Aunt Martha before they stumble upon the body themselves, only to learn that the two old women aren’t just aware of the dead man in their parlor, they killed him! Between his aunts’ penchant for poisoning wine, a brother who thinks he’s Teddy Roosevelt, and another brother using plastic surgery to hide from the police—not to mention Mortimer’s own hesitancy about marriage—it’ll be a miracle if Mortimer makes it to his wedding. Arsenic and Old Lace is a classic comedy about the only thing more deadly than poison: family.

If you cannot be present for an in-person audition on these dates, please email a video audition of your memorized monologue by February 20 to: theatreproductions@cwc.life

How should I prepare for my audition?

Remember to schedule your audition (above)!
All actors auditioning should prepare a short monologue (2-3 minutes) that they find either online or from another source. The total length of an audition should not exceed 5 minutes. Monologues should be memorized and show a range of emotions and skills (you do not need to provide copies of your monologue). Please arrive 30 minutes early to fill out the paperwork.

Choose your own monologue and be prepared to attempt the correct accent for each character. If you haven’t specified which character you’d like to portray, it would be a good idea to attempt several accents at home before you audition.

Accent/dialect work is important in this show, and we want to see your best attempt at the correct accent for each character. Perfection isn’t needed, we want to see how well you can attempt it. You may be asked to perform the scene with and without the accents, so we can judge your acting ability.

Do you have to attend Christ Wesleyan Church?

No, anyone can audition whether or not they attend a church.

When do rehearsals start?

When are the performances?

Remember, you are auditioning to act in a show. Yes, there are times when simply being a cute little kid is enough, but we are looking for actors for the most part. Make an impression by actually acting during your audition, not simply delivering lines.

2. Learn a little bit about the show you’re auditioning for.

The more you understand the show and the characters, the more you can tailor your audition toward your desired role.

3. Take the time you need to prepare.

Remember Rule #1–Act. Don’t just read. Be familiar with your audition piece and have it memorized. Don’t worry if your piece isn’t from this show. We want to know you have the ability to actually act.

4. Slow down and enunciate every word.

One sure sign of nervousness is speeding through the lines. When you talk too fast, it is harder to make sure each word is understood, and the emotion that should accompany those words does not come through. Slow down and make sure you can say each word clearly.

5. If you make a mistake, battle through it.

Even the best actors occasionally make mistakes onstage. But good actors know how to work through their mistakes without letting the audience realize a mistake was made. One of the things we are looking for is poise. We want to know how you will react when things don’t go as rehearsed. If you fall apart during an audition, it doesn’t give the director much confidence that you will react well on the nights of the show. If you do make a mistake, don’t apologize. Don’t ask to start over. Just pick up from where the mistake was made and push forward.

No one is guaranteed a spot in a show. It doesn’t matter what other roles you’ve had or other theatres you’ve worked with. Each part has someone just right for the role…that may be you, but maybe not. That doesn’t mean you’re not a good actor. If you come across as someone who is hard to work with, it makes it much more difficult for the director to give you a part. We have seen quite a few actors walk into an audition because they assume they will be given a part, and their audition is flat and uninspiring. Then they are shocked when they don’t get a major role in the show. If you are serious about wanting a role, you need to give it your best. Every time. If you have acting experience, we will know from the information on your audition form. It is not unusual for someone with no previous acting experience to get a good part because they blew us away in the auditions.

One of the biggest obstacles between you and getting cast in a show is your nervousness. Nervousness makes you timider. It makes you talk too fast. It makes you less memorable and more likely to get lost in the crowd. The best way to overcome your nervousness is to practice. That means auditioning more. If you don’t get the part, shake it off as a learning experience, and when the next show rolls around, go out and audition again. The more you go through the process, the easier it becomes.