This free showing of Unplanned reminds us that all life matters on the Sanctity of Life Weekend. A rep from Expectations Women’s Center will share how they minister in our community. The movie will be shown at the CWC Milton Campus only at 6:30pm.

From Cary Solomon and Chuck Konzelman, the writers/co-producers of God’s Not Dead, comes a film that speaks to one of the most polarizing topics of our day. Unplanned brings us an eye-opening look inside the abortion industry from a woman who was once its most passionate advocate. After reading Abby Johnson’s best-selling book of the same title, Cary and Chuck were moved to bring this inspiring true story to the big screen, giving voice to a woman who has been on both sides of the abortion conversation. Unplanned is the most important movie you’ll ever see on the most controversial issue of our time. No matter which side of the fence you’re on, no one will leave this film unmoved by Abby’s journey.

Unplanned is rated R for its realistic depiction of abortion-related images, along with a few uses of mild language. It’s requested that parents/guardians accompany anyone under 18 as this film is intended for a more mature audience. 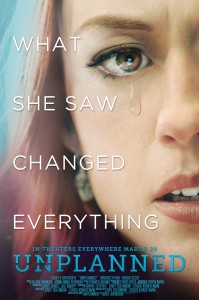 “Unplanned” is the inspiring true story of one woman’s journey of transformation.

All Abby Johnson ever wanted to do was help women. As one of the youngest Planned Parenthood clinic directors in the nation, she was involved in upwards of 22,000 abortions and counseled countless women about their reproductive choices. Her passion surrounding a woman’s right to choose even led her to become a spokesperson for Planned Parenthood, fighting to enact legislation for the cause she so deeply believed in.

Until the day she saw something that changed everything, leading Abby Johnson to join her former enemies at 40 Days For Life, and become one of the most ardent pro-life speakers in America.